Autumn has arrived early this year as we didn’t seem to have much of a summer. Looking at the mountain rescue call out reports, the Peak District moors have certainly been proving too much for many ill prepared walkers who have ended up having to be rescued.  It’s not just about poor map reading and navigation skills and the over reliance on GPS navigation technology, but also about having the skills, clothing and equipment to deal with the difficult terrain, which has become extremely boggy after the summer rains.

The Following is an extract from Buxton Mountain Rescue Team call out log: 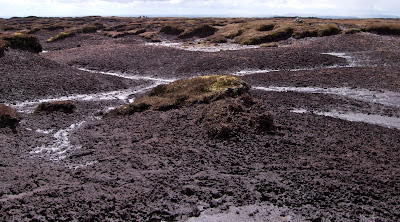 “Buxton Mountain Rescue Team called out as night fell to search Kinder moor for two walkers who were trapped by deep bog without lights or whistle.  Although the casualties, a married couple from Doncaster, had no apparent injuries, they were very cold and disorientated. The night was damp and misty at high level, with some wind. They had set off for a days walk from Edale, up Grindsbrook to Kinder Downfall.  Returning on a GPS bearing, the female became trapped in deep wet bog at 16.30 hrs. After freeing themselves from this, the couple were keen to find a way out off the boggy area – but could not, and became trapped as darkness fell. They had no torch, but did have some food and spare clothing.  They were able to give a grid reference of their location to the police when they dialed 999. This proved accurate, and it was straightforward for rescue team members to locate them. Following a warming up in a box tent, the couple were led via Grindslow Knoll back to Edale, arriving at 23.30. As they were not injured, they were able to drive back home.”

As part of the “Moors for the Future” project, many of the Groughs (drainage channels) that cross the centre of Kinder Scout have been dammed up to prevent soil erosion. The effect of this has been to make an already boggy area into a seriously boggy and even dangerous area, where those with little experience or facing darkness can find themselves in frightening conditions. The situation has been made more serious by the very wet summer that we’ve had this year.

When you join us for a course run by Peak Navigation Courses, we look at the range of skills necessary for safe moorland walking. There are specifically three courses available aimed at enhancing navigation and hill walking skills in moorland and mountain situations.

1.            An Introduction to Moorland Navigation
A 1 day course, designed for people who have done some walking, which will enable you to use a map and compass to navigate over open moorland.

2.            Intermediate Navigation
The 1 day “improvers” navigation course for people who already know the basics of using a map and compass. The course involves a walk of approx. 10.5 miles crossing the centre of Kinder Scout.

3.            Night Navigation (for poor visibility conditions).
Trying to find your way when the mist comes down, or it is getting dark can be frightening.  Planning to walk in the dark is great fun if you have the skills to navigate safely.  This 3 hour evening course is designed for people who have basic map and compass navigation skills, and want to learn more advanced techniques.

For those who have become proficient in their navigation, we offer a series of “Navigation Master-classes” throughout the year where we spend the day revising and practicing skills during some exacting navigation challenges.

Peak Navigation Courses are run by qualified International Mountain Leaders who are keen to ensure that people enjoy the hills safely and not become another mountain rescue statistic!

Buy a course in our online shop

Map and Compass and GPS Navigation Courses for the moors and mountains based in the Derbyshire Peak District.
Jane and Mike have been running Peak Navigation Courses since 2004. They are both qualified International Mountain Leaders & NNAS Tutor Award holders, who regularly lead walking holidays both in the U.K. and overseas.